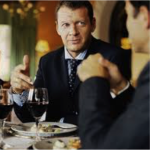 One of my guilty pleasures is leaving the office and having lunches with others. It can be a lunch with a friend or a client; I enjoy good food and good conversation. The other day, I had lunch with someone who was both a friend and a client. I noticed something curious when we had finished our meals; one of us had finished his meal while the other had barely touched his.

I suppose you could jump to a few conclusions: Perhaps one of us ate faster than the other. Good guess, but that wasn’t the case. Maybe one of us had a meal that was significantly smaller than the other. Two men having lunch together with that kind of difference in portion size? Uh, no. Maybe someone was talking a whole lot more than the other? Now we’re getting warmer!

When you are in the throws of a good conversation, it’s hard to tell who is talking more than the other. After all, who’s really keeping score? It turns out your food is! Assuming you’ve been raised correctly, it’s awfully hard to eat and talk at the same time. When it comes to partaking in a conversation, it would be safe to say that the person asking the questions is going to have plenty of time to eat, and the person answering the questions is going to have difficulty finding time to eat his or her meal.

I’m quite sure I’m not the first person to tell you that asking questions is a great way to take control of a conversation. By asking questions, you’re learning about the other person and it allows the other person to feel comfortable conversing with you. It is also safe to say it is certainly easier to answer a question than it is to ask a really good question. Well, it might be harder at ask those questions, but it’s a heck of a lot easier to enjoy your meal! When questions are sincere and well thought-out, the responses are free flowing and enjoyable. Keep those questions open, and you’ll have plenty of time to eat. Sprinkle in good listening habits, and you have a recipe for a great conversation.

My friend and I had a great lunch. We had not seen each other for about a year and there was a lot to talk about; both of us have children roughly the same age, and we both run our own businesses. When my friend finished his meal, I couldn’t help but notice that I had half a sandwich staring back at me. I actually referenced that sandwich when I said to my friend, “It appears you asked most of the questions during the main course. Now it’s my turn to ask you some questions while we have a cup of coffee.” I’m pretty sure that his cappuccino was pretty cold by the end of the meal! (Not that I’m competing… exactly.)

So you see, a simple meal can teach you a lot about your own conversational habits. To be clear, it’s not a competition; it’s a conversation, but whoever finishes first provides a pretty interesting measurement. I hope I haven’t ruined your next meal, but rather provided you with an ingenious way to see whether you’re asking the questions or giving all of the answers. Chew your food, watch your manners, and remember this: When it comes to your ability to create a conversation that is truly appreciated by others, whoever finishes first… wins!