When More Is Not Better 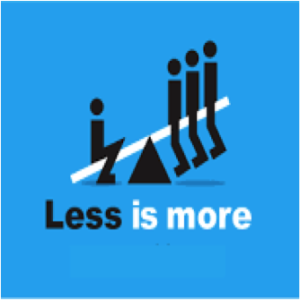 So, how do you make your case? If you’re like most you can’t wait to provide whomever you are persuading a powerful reason that will make your case! But then something happens. A thought emerges: If one powerful reason is good, two is even better. Why stop at two? Three solid reasons must be better, and four will knock the cover off this conversation! And therein lies the problem.

For example, think about a time when you were making a point with your children. As a parent you sat down after dinner and told your child he or she was not acting in a responsible manner because homework was not being turned in on time. A note from the teacher turned this into a pretty cut and dry conversation… but you couldn’t leave it alone. You were on a roll and so to strengthen your case about responsibility you decided to throw in, “you’re not practicing your trumpet, you’re not putting your things away, and you’re not completing your chores.” “More” might seem better until you hear; “I just finished washing the dishes two hour ago!” As you sputter along with a nervous, “Uh, well, you see, that’s not really what we were talking about…” do you still think “more” is better?

We are drawn to the idea that ‘more” is better, when the reality is “more” is anything but better. For instance:

Once again it becomes a case of instinct versus logic. Instinctively it feels right on many levels to provide as many reasons as possible to win an argument, prove a point, or make a case. “More” may feel better, but the problem is, it just isn’t logical. That “more” you’ve been so proud to stuff into your argument may ultimately be the cause of your undoing. When you let logic rule the day you’ll find that your most compelling argument is far easier to state and defend, then a series of less important clutter.