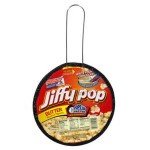 Who doesn’t like popcorn?  Maybe it’s the taste, or maybe it’s the thrill of truly stuffing our face with it, or maybe it’s the sheer quantity that we’re allowed to eat: It’s a terrific food. We are practically raised and educated to enjoy popcorn. But what if you had never heard of popcorn before? How would you sell it?

When I was a little boy, I remember my mother heating oil in a pot, and dropping the corn kernels into the oil. It wasn’t the safest way to cook popcorn, nor was it the most exciting way to pop it. The clean up wasn’t exactly a breeze, but the end product sure was good.

Then a company called Jiffy Pop came along. Jiffy Pop not only simplified the process of cooking popcorn, but it also did something else that had never even been considered; it made cooking popcorn fun. The company actually branded the product as, “Jiffy Pop – The Family Fun Treat!” and boy, was it fun!  As a matter of fact, Jiffy Pop said more: “It’s as much fun to make as it is to eat!”

When I ask people about Jiffy Pop, almost everyone remembers everything about it except one thing; the taste. That’s because popcorn is popcorn, and if you’ve tasted one popped kernel, you’ve pretty much tasted them all. We don’t really remember the actual flavor, or the fairly high amount of kernels burnt on the bottom of the Jiffy Pop pan. What we do remember is the experience.

Sadly, this thing called a microwave oven came along, and popcorn seemed to be the poster child for just how easily something could be made using this contraption. That put an end to most of our “Jiffy Pop Family Fun.” Oh, it’s still sitting in your supermarket, perched up high on a dusty shelf, like an awkward 8th grader sitting alone at the school dance.

We can learn an important lesson from this “Family Fun Treat.” I’m pretty sure that if I created a popcorn lineup, you wouldn’t be able to identify your favorite popcorn just by taste. That’s not the real reason why you bought this product. If you look at most of the products you have in your house, you’ll realize that you purchased many of them for two reasons. The first reason is the product itself, but the second reason is the “idea” of the product.

When we are trying to sell a product, how many times do we find ourselves overselling the product, and overlooking the idea? One reason for this is because most sales training is typically spent on the product. If you want to separate yourself from the competition, you need to do more than just sell the product. You need to sell the idea. Just in case you don’t know what the idea is, there’s a sure fire way to find out; ask your client, because they’ll tell you exactly what it is.