What Do You WANT To Happen? 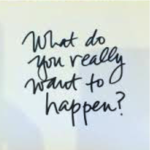 It’s rather amazing how our reaction to little, somewhat harmless events can provide insight into how we react to bigger events. Here’s a quick test for you: Take a moment and consider what your gut reaction would be to the following situations:

Let me start by appealing to your sense of logic. When you’ve misplaced keys or almost anything, how often are they actually lost forever?  Would you say 10% of the time?  I’m sure that darn warning light has indicated a major repair bill or two, but how often does that truly happen? Would you agree that it’s maybe 10% of the time?  How often has a meeting with a customer actually ended in disaster?   Let’s guess 10% of the time one more time.  That means if you’re focusing on the most negative outcome, you’re actually ignoring a 90% success rate.

It may feel like looking at worst-case scenarios is a genetic trait.  But who’s to say that, just because we’re “wired that way,” we can’t do a little rewiring?  I believe that if you say something enough, and you believe what you’re saying, you can rewire that thought pattern and make it a habit.  So, let’s try a new thought pattern:

Focus on what you want to happen, not what you’re afraid might happen.

Will there be times when what you’re afraid might happen, will happen?  Sure, and during those statistically obscure times, your reward will be, well, I suppose, uh, come to think of it, what exactly is your reward?  Is it just being right?  Panicking, worrying, and constantly putting yourself through unnecessary stress doesn’t seem worth what appears to be a nonexistent reward.  Is it to soften the impact of disappointment?  Preparing to fail doesn’t ease the pain of failure.

If obsessing on worst-case scenarios were just an occasional habit, it really wouldn’t be that big a deal.  Unfortunately, the act of jumping to worst-case scenarios is usually a pattern, and a destructive habit, and it can be corrected.  Remember, the odds are on your side: What you want to happen, will most likely happen!