Walking In The Client’s Shoes

At some point in a workshop, you’ll probably be engaged in a role-play. Did you see that face you just 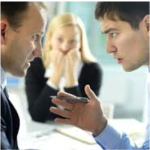 made? It wasn’t a happy face; it was a face that looked like you had a toothache! I’m not sure I’ve ever met a person whose reaction to a role-playing was this: “Oh boy! When do we get started?!” However, before you start tweeting #Ihateroleplays, you might want to take another look at this often underestimated activity. Although some feel that role-playing is an antiquated approach to training, there is a lot of value in it. Let’s start with one of my favorite training quotes:

“What we hear, we forget. What we see, we remember. What we do, we learn.”

That’s why so many good training programs incorporate small group activities, and the granddaddy of all small group activities is the role-play. To refresh your memory, role-plays are typically conducted in what’s called “triads,” or groups of three. This allows larger classes to split into small groups, with each group consisting of a person utilizing the skills being taught, a person playing the role of the client and an observer.

Everyone obsesses on the role of the person who has to actually utilize those skills. That’s where the pressure may lie, but that’s not necessarily where the key lessons are.

In these pressure packed situations, let’s first talk about the person who is the star: The person practicing the freshly taught skills. He or she can only focus on the actual process, and little else. I’ve witnessed thousands of role-plays in my career, and I can’t tell you how many times I’ve seen situations where individuals forgot to tell the client their name, or their company’s name, or other incredibly basic pieces of information that they would never forget in a real client meeting. It’s quite common for people to finish up and say, “I can’t remember anything I just said!” It’s understandable because, in that role, the person is trying to use new skills for the first time.

A triad consists of three roles that rotate for a reason. The pressure is not nearly as high when playing the role of the client. The focus is not on the client, and other than having to add basic background information that is typically written down, the person playing that role needs only to react to what he or she is hearing… and that’s where a lot of the real learning takes place.

This type of learning isn’t just for those who play the role of the client either. The third role of a triad role-play is that of an observer. When I conduct role-plays, my observers are given a short list of criteria to look for. I try to keep this task to a minimum, and for a good reason; the observers are in a unique learning role themselves. In a sense, an observer is perched above the fray, and that observer can truly feel the nature of the conversation that is taking place. After a role-play, it’s not unusual to hear a rather stunned observer say this: “I’ve never had an opportunity to actually hear the conversation that I’ve had with my clients for so many years.”

This message isn’t just for those who role-play in a business environment. Why do you think therapists often use role-playing in couple and group therapy? There is so much to be learned when clients can reverse roles and play the other side of the conversation. When we’re able to walk in another person’s shoes, we can see a completely different perspective.

Some say empathy and compassion are nearly impossible to teach, but I disagree. When you understand role-playing for what it really is, you can relish the learning that goes on when you are not the one necessarily under fire. Once you remember that, you will get far more out of the experience than you could ever have imagined.