The Sum Of It All 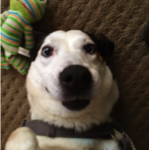 There’s something special about having a dog in the house. I grew up in a family with dogs, and we raised our kids with dogs. Sadly, our sweet dog Zoey passed away about eight months ago, and the house just hasn’t felt the same since. So, we’ve decided to begin the process of looking for, and adopting, another dog.

It’s a big decision. Believe me, we know what a big decision it is, and we don’t take it lightly. Anyone who has ever owned a dog will tell you that there certainly are pros and cons to having a dog. The other night, while out with friends, we had a conversation that surprised me. When I mentioned that we were getting a dog, my friend hit us right between the eyes with a pretty depressing comment:

“A dog? With no pets and no kids at home, why would you want to do that? Right now, you can just pick up and go wherever you want, whenever you want. You adopt a dog and you’re going to lose your freedom!”

My wife looked at me with a pretty nervous expression, and my friend seemed to almost gloat about hitting on a point that was indisputable. My friend was right and we both knew it. The freedom we’ve currently been enjoying will be lost, and it has been a point we’ve been struggling with. Although we’ve reached a shaky peace with it, it was difficult hearing it said with such bravado. My initial reaction was to dispute it, but I decided on a different approach. After all, what my friend had said was completely correct.

“You’re absolutely right,” I said as my friend’s smile seemed to widen. “We’re going to lose some of our freedom, a freedom we haven’t experienced in over 25 years.”

That’s called “acknowledging.” If you are going to disagree with someone, you’re going to have a much easier time if you can do it after you’ve demonstrated that you were indeed listening to his or her argument. You need to recognize what the person said, and acknowledging does just that.

There was something else I was doing that I should mention. Rather than disagreeing with my friend’s argument, which is clearly the instinct, I agreed. Her point really was indisputable. How often do we battle with friends or clients who are making valid points because we don’t want to “lose” an argument? We flail around, making a weak attempt at an argument that is unwinnable… on that particular issue. We forget that arguments aren’t won, and decisions aren’t made, based on one isolated point. Wouldn’t it make sense to spend more time looking at the entire issue? So, I went on:

“We’re making this decision based on a number of different things. We’re going to experience the joy of sharing our home with a dog that hasn’t had much joy in his life. We’re going to have a wagging tail waiting for us with unconditional love. We’re going to take our walks, and share our couch, and experience a happiness only a dog owner can know.”

If I wanted to bury her with facts, I would have mentioned that it has been proven that owning a dog significantly lowers the risk of heart attacks and has a positive impact on the lives of those with depression and/or anxiety. For some reason, having a dog helps us to lower our blood pressure, helps us recover faster from stress, and protects us from developing asthma later in life. Is it merely a coincidence that dogs are working in courtrooms, hospitals, nursing homes, hospice-care setting, classrooms, and airports to help people in stressful situations? A few days ago, there was a long and well-researched article in The Washington Post stating the many physical, emotional, and psychological benefits of owning a dog. (“September 20, 2016 – Health and Science section, Washington Post article by Marlene Cimons.”)

Life consists of many decisions and choices we have to make, and each decision contains its own small list of pros and cons. I’m not sure I can think of one single decision that provided an exclusive list of only one or the other.  It’s natural to lose perspective when we hear the loudest, most aggressive, or the most depressing argument that can be made. Don’t take the bait. When an intelligent argument is made, be sure to listen, and then acknowledge it. That will earn you the right to be heard by others, and it will allow you to present a more balanced look at the decision in question. Ultimately, it will afford you the opportunity to make an intelligent decision based on all the factors involved.

Did I mention we were thinking of adopting a dog? Because we are! 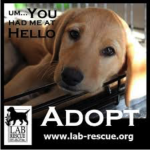 (There are so many wonderful dogs and cats looking for forever homes. I would encourage anyone who is considering bringing a dog or cat into their lives to adopt from any of a number of wonderful agencies like the one that we are currently working with – Lab Rescue of the LRCP)