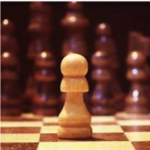 When was the last time you tried to teach another person how to play chess?  It’s no easy task.  Recently, one of my kids expressed interest so I decided to have a go at it.  Clearly, I was feeling ambitious.

I began my lesson with what I felt was the easiest piece on the board; the pawn.  For those who don’t play chess, a pawn is a chess piece that represents the smallest size and value. A pawn can only move one square forward (or two on the first move), or one square diagonally forward when capturing an opponent’s piece. They are pretty expendable and as such, each player begins with eight pawns.

I think the poor pawn has a bit of an image problem. The pawn is perceived as a very weak piece on the board, and the word “pawn” is a fairly unflattering label to attach to another person. Webster’s Dictionary defines the word “pawn” as “a person used by others for their own purposes.”  Ouch.

The Urban Dictionary takes an even tougher stance on the poor pawn. It has 2 definitions: 1. Someone who is used or manipulated to further another person’s purposes.  2. A person who is a fool.  Clearly no one in his or her right mind would ever want to be called a pawn… or would you?

There’s more to the pawn then meets the eye, and as I began to wrap up my explanation of this apparently unfortunate piece, I was reminded of one, last, rather obscure quality of a pawn.  The pawn is the only piece on the board that has the ability to do more – much more.  The rules state that if a pawn can make it to the other side of the board without being captured, it “promotes.” This means that the owner of the pawn can replace it with any other piece desired other than a king.  As the queen is the most powerful and versatile piece on the board, that’s usually the piece selected most often.

So, let’s review.  The pawn is the chess piece that is known as the weakest on the chessboard, it poses the least threat, and it is so undervalued that it is actually a personal insult if connected to an actual human being.  This same piece also has the ability to become the most powerful piece on the board.  What do you think of the pawn now?  Personally, I think the pawn makes the perfect underdog. We can learn a lesson or two from this pawn; in order for it to become powerful, two things need to occur:

Aren’t those a couple of tactics that would affect your personal success as well?  With hard work that transfers to actual skill… and a little bit of luck, that underestimated underdog pawn can be transported from being the weakest piece on the board to the strongest piece on the board.  The next time you feel undervalued, let the pawn inspire you to work hard, take control of your own luck, and show others you have the ability to accomplish great things! 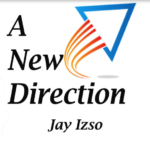 I’ve done dozens of interviews on the book, Why People Don’t Believe You.  Here’s one of my favorites with Jay Izso! 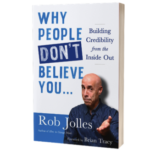 Don’t forget to get your copy ofWhy People Don’t Believe You.  It is now available at bookstores, and available at Amazon in paperback, E-Book, audio book, and CD versions.  It might not be a perfect book, but the message above was certainly not lost on me, and I think you’ll love the way it came out!