The One Thing An Audience Will Not Forgive 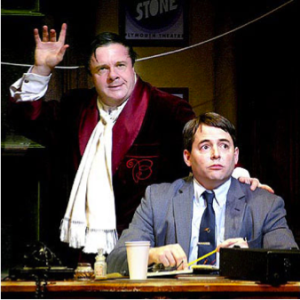 I’m not crazy about Matthew Broderick: I loved him in Ferris Beuller’s Day Off, but who didn’t?! Thirteen years ago, I was in the audience of a Broadway performance of the musical “The Producers.” He was performing one of the lead roles. It turns out that some knucklehead was taking pictures of the performance; a real no-no in the world of theatre. Of course, neither I nor anyone else in the audience would have known if it were not for what transpired next. In the middle of a scene, Matthew Broderick stopped his lines, looked out at the audience and shouted this: “You are not allowed to take pictures during a performance!” Then he said it again, and then he said it again. Each time he said it, he lost more of the character he was playing and he became just Matthew Broderick. When his costar brought in a beautiful ad lib to attempt to keep the scene going, Matthew Broderick raised his voice at him as well, turned his back, and began pacing around the stage. Knowing how upset he was, the audience was crushed. Eventually he regained his composure and somewhat recovered. Unfortunately, the audience never did.

The fact is an audience will excuse almost anything under one condition: Despite whatever is happening that wasn’t planned for, you have to convince that audience that it isn’t bothering you. If, however, you allow the audience to know that something is bothering you, in a sense, you are breaking what’s called “the fourth wall.” The fourth wall is the imaginary wall at the front of the stage in a traditional three-walled theatre, through which the audience sees the action in the play. When you let an audience know that something is wrong, you risk jolting the audience out of whatever experience you have been creating. You’ll leave them distracted, feeling sorry for you, and unable to once again immerse themselves in your message. That’s a hole almost no one can dig themselves out of.

Johnny Carson knew this all too well. As a kid, I remember laughing harder at the jokes that fell flat than the jokes that hit their mark. Why? Because when a joke fell flat, Johnny never seemed bothered in the least. If it didn’t bother him, it didn’t bother me! He’d smile, make another comment about the joke, and the audience would roar. Imagine what would happen to that same audience if he reacted with the disappointment he must have felt inside?

Watch a veteran presenter take to a stage and you’ll see confidence in their eyes. You won’t have to look too hard because it will be right there in front of you. That confidence emotes from each step they take. They know almost anything can be forgiven as long as they don’t make the audience feel sorry for them.

Notice a theme here? When you step in front of an audience and things aren’t going exactly as planned, the only thing you really have to remember are these four words: “Keep it to yourself!” If it doesn’t bother you, it won’t bother your audience.

Matthew Broderick’s response to an inappropriate theatregoer should have been to go on with the show, and the moment he stepped off stage between scenes, alert the stage manager. No doubt, they would have had an usher quietly take care of the situation. Instead, he stopped the show and let the audience know exactly how upset he was. Don’t get me wrong; I loathe audience members who do anything with their smart phones during a performance. By stopping the show, embarrassing his fellow actor, and spending over two minutes silently moping around on stage, he didn’t just kill the scene. He killed the show for the entire audience due to how upset he was.

Do I, or anyone in front of an audience, like forgetting key parts to a presentation, or forgetting where we are in a presentation, or having a technical malfunction… or any litany of issues that can occur? Of course not! But I can promise you this: If you can convince the audience it doesn’t bother you, it won’t bother them. Now you might understand why I harbor such a lack of respect for Matthew Broderick, a performer who should have known better. I can’t forget that performance, nor can I forgive it.   It’s really quite simple: “When you step in front of an audience, it’s not about how you feel; it’s about how you make the audience feel.”