The Function of Dysfunction 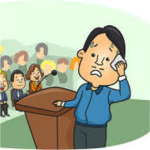 I respect anyone who meticulously prepares to do the very best he, or she, can, no matter what the task. I certainly expect that same preparation from my doctor, my lawyer, my accountant, and the many other people I count on. I also expect that same level of preparation from any presenter I see or work with… but that doesn’t mean I fear moments that are less than perfect.

Some years ago, I was conducting a workshop for an insurance company. I was going to be doing an exercise that required me to work with an audience member; we were going to track a recent buying decision. There were about three hundred people in the audience, and when I asked for an audience member to work with me, one brave soul put up his hand. He awkwardly admitted that he had recently purchased a car. I had a scribe ready to go on the stage as I moved into the audience with a microphone, and I was ready to begin asking a series of questions I had prepared. The first question was the easiest, and the banter we engaged in reminded me of a scene from the movie, “My Cousin Vinnie.” The exchange went something like this:

In a deep southern drawl, “A two-ton dually.”

“A what?” Some laughter.

“Uh, what was that word?” More laughter.

Did you say, a two-ton dually?” Even more laughter.

“What is a two ton dually?!” Still more laughter.

The howls of laughter let me know how much the audience loved to see their presenter squirm! Over the next ten minutes, my participant and I moved through a kind of rhythmic dance. He was throwing words at me that I had never heard before, and I was trying to gather the information I needed to make the exercise work. I was also feigning my confusion and lack of knowledge in this particular area of automobile mechanics. In the end, the participant gave me exactly what I was looking for. For the members of that audience, however, it looked like he made me work hard for it. And therein lies the magic.

People don’t remember content as much as they remember the experience.

If you’re wondering why so many people continued to ask about that one particular presentation, it’s because I was hired by that client to conduct many more workshops. The client liked that first presentation so much, he hired me to conduct five more years of training for them. When I was at their training facility, I’d hear this every time: “How about that two-ton dually guy! He really got you, didn’t he!” Each time I heard it, I’d respond with the same sheepish grin; “He sure did!”

The greatest way to earn the respect of an audience is not to demonstrate how much you know or how able you are to perform what was obviously planned. The way to earn the respect of your audience is to demonstrate your agility when you come to a moment that was clearly not planned. That’s because audiences don’t want to see a perfect presentation; they want to see a human one.

Does this mean we plan for dysfunctional moments within a presentation? No. What this means is that we can welcome moments that are clearly unplanned, and we can learn to relax and go with them. We do this because it may very well take us on an unscripted journey that those in attendance will never forget.