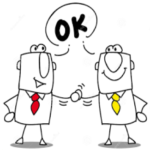 NEGOTIATION: a formal discussion between people who are trying to reach an agreement

Reaching an agreement sounds easy enough, right? Whenever you hear anyone lecture on negotiation skills, you always hear the same thing: The goal is to create a win/win agreement. How lovely. As a matter of fact, I couldn’t agree more. The only problem is that this mythical agreement frequently doesn’t represent reality, because often, this just isn’t possible.

When you look above at Webster’s definition for negotiation, you’ll notice there’s nothing in the description of negotiation that says, “everybody wins.” The reality is, there are actually four classic approaches to negotiation.

Perhaps I’m just not much of a negotiator, but more often than not, I find myself taking a classic “Lose/Win” approach to negotiations. Yes, this approach suggests that one person is willing to take a loss, but take a moment: Look a little deeper at this approach because there’s more to this picture.

You’ve actually seen this approach subtly played out if you’re a sports fan. For instance, watch a basketball game and you’ll see what I mean. I happen to be a big fan of basketball because I both played the game and I coached many teams. I have witnessed this Lose/Win scenario play out in games many times. You have too! Watch as the referee blows his whistle and calls a player for walking. Moments later, an irate coach comes shooting off the bench to protest: “What are you, blind?” he screams. “You’ve got to be out of your mind! There’s no way he dragged that pivot foot!”

Now I’ve watched a lot of games, and I’ve got to tell you, I’ve never seen a referee answer back saying something like this: “You know, Coach, the more you speak, the more sense you make. You seem so passionate and sure of yourself. I didn’t really get a good look at it anyway. Come to think of it, he didn’t walk! Thanks for the help.”

One has to wonder why a coach would go through this charade of arguing about a call. Quite simply, he or she is looking for what’s referred to as a “makeup call.” The next time you watch a game, watch how quickly a mysterious call seems to go against the other team that just benefited from the previous call in question. What the coach was really saying is, “I’ll give you this one, but I want the next one!”

In business, the scenario and the results are not that different. If you believe in your product, and you believe in yourself, and if a Win/Win solution is eluding you, why not bite the bullet? Secure the key parts of the solution you are looking for… with a conditional agreement that allows you to fully achieve your objective the next time. Assuming you exceed the expectations of the person you are negotiating with, the next time, you will probably have established enough credibility and goodwill to not take a loss again. As the saying almost goes, “You lose some – you win some!”