The Cost of Being Right 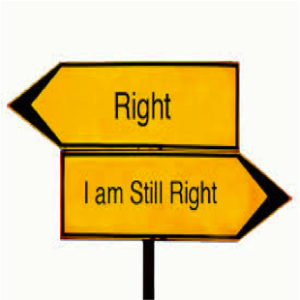 One of the benefits of being raised by a marine was that I was taught the meaning of courage. My father was a corpsman in not one, but two, wars, and the courage he displayed was beyond imagination. At an early age, my father demanded that I learn how to be courageous. I was willing to do anything to win my father’s favor, so I eagerly complied. This trait was instilled in me, and it is something I’m fiercely proud of. It has served me well… most of the time.

When I was pushed, I pushed back; when I was shouted at, I shouted back; and when I had the right answer, I fought like heck to be heard. But each push, shout, and fight came at a cost. The most severe of which was the cost of being right.

It’s amazing how many business schools miss this simple message. As a business major at the University of Maryland, I learned the principles of business, economics, accounting, statistics, and so much more. One thing I was never taught was about the real-world politics of business. Without a teacher, I was left to my own instincts, and the instincts of my father. Those instincts served him well in the marines. They also served him well in his career as a salesman. He was a damn good salesman, but he never really had to deal with corporate politics. When you work for an organization that is driven by sales, and you outsell those around you as he did, there are no politics.

I had no use for company politics, and took pride in being known as a guy who would never be silent when he knew he was right. I welcomed the price for being right because I knew the courage it took to do so. I battled management when I knew I was right, and I battled my coworkers when I knew I was right. I might even dare to admit that a part of me, deep down inside, enjoyed it. One of my favorite sayings was this: When I’m no longer on this earth, they are going to put on my tombstone: “This man never backed down when he knew he was right!” I wore my beliefs like a badge, and I carried that mantra with an enormous level of satisfaction. I was wrong.

I felt that others viewed me as a courageous person, and I thought I was respected because I had the nerve to say what I believed. Looking back now, I’m quite sure many did not view me in that way. I believe I was viewed as a person who did not fit into the machinery of the corporation, and therefore, I was an obstruction to the organization. The corporation put up with me because I worked hard and consistently exceeded the expectations that were placed on me to do my job, but the truth is, I was operating within an uneasy truce with those around me. I became disenchanted with the tension that being right seemed to create in others, so I became an entrepreneur. If you ask me why I left Xerox, I know that I could give you any number of reasons why. The real truth is that I left Xerox so I could be right.

For those who want to pay the price for being right by either leaving, or feeling the indignity of being asked to leave, it seems that a common answer is to become an entrepreneur. It’s an answer, but it isn’t necessarily the right answer. In my case I wasn’t courageous, and I wasn’t right; I was lucky. If I could jump into the Way-Back-Machine and sit down with a young, starry-eyed Rob Jolles who was bound and determined on being right, I’d tell him a few things that he needed to hear.

When you go to a job interview, you want to be seen as someone who is a team player. You want to let them know you can support the ideas of others, and that you understand there is a time and place to be right. This is not taught in business school, and I cannot find a Way-Back-Machine. All I can do is work within the present and try and spare others the misfortune of confusing being right with being an asset to a company, and a team. Forget about tombstones, and remember that being right can come at a severe cost. If you’ve paid that price, learn from it and evolve. It’s never too late to learn how to be wrong.