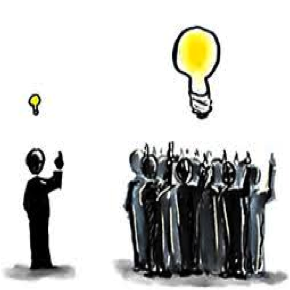 As a Xerox trainer in the 80’s, the Xerox Corporation gave me the opportunity to go through their “Leadership Through Quality” program. I jumped at this chance to learn about the “Problem Solving” and “Quality Improvement” processes – something the company was known for. Because the implementation of these processes required a steady diet of meetings, Xerox also tucked into the program a module that outlined various meeting tools to make sure these little get-togethers ran efficiently. It was a brilliant move because if a group couldn’t hold meetings effectively, those amazing processes would quickly be lost.

In one of those follow-up meetings, one of the most challenging moments of truth came when the group had to reach consensus. To help this part of the process along, groups were taught how to brainstorm, and truly expand their thinking. When this was done properly, the ideas would flow so fast and freely that it required two scribes to capture the barrage of great ideas. That was the fun part. Contracting these thoughts to reach a single idea was the difficult part.

We taught all kinds of methods to contract a list of ideas, including techniques like grouping and weighted voting. Despite our best efforts, it was rare for a group to reach 100% consensus on one idea. The solution was a common filter – five words that were as follows: “Can you live with it?”

Sounds simple enough, doesn’t it? Those five words were used over and over again to help those groups that simply could not reach consensus. It was often pointed at the few dissenting members, and frequently, in a low, depressed moan, the holdouts would grunt, “I guess so; yes. I can live with it.”

I’ll bet you can guess what came next. If the implementation of that idea was successful, the group would be praised and all members took credit. If the idea was not successful, however, the first words you would here from the “can you live with it” folks were, “I never liked that idea to begin with!”

So Xerox pulled a fast one. In 1987, Xerox quietly changed those five simple words and redefined their version of consensus. In doing so, they redefined what a true professional compromise really meant. We went through every training manual we had, and removed the previous “Can you live with it?” words that defined consensus, and replaced them with four new words.

The four words that became our new filter for consensus were this: “Can you support it?” This was a much more powerful filter because it required true backing. Once the group agreed that they could all support a given idea, there was no one turning on the group later if the idea was not successful.

What’s more, we made sure to tell groups that when these four new words were used, they were to be used with a careful explanation. We wanted true consensus, but not at the risk of missing critical information. If a dissenter knew of information that the group was unaware of, and truly could not support it for that reason, they had to let the group know. We wanted to make sure that no consensus filter, tool or vote would ever be used as a weapon to achieve agreement.

Consensus is tricky because it frequently requires supporting ideas that are not your own, and often requires supporting ideas that you don’t like as much as others. When you learn a realistic filter to use to determine consensus, you learn when you need to let an idea go and support the will of the group, and when you need to stand your ground, despite the will of the group. That distinction is the key, and from that, we can all learn when to hold on to an idea, and when it’s necessary to let go of an idea to help a group reach consensus.