Something Lost – Something Gained

They say that in every life a little rain must fall. This is a story about a man and his father, and a little bit of rain…

In the spring of 2003, my family and I came face-to-face with what most would call a disaster. Our disaster was defined as a severe fire in our home. I will always look at it as a blessing. Despite the physical destruction of almost half our house, no-one in my family was hurt, nor were our two dogs or our two cats. We were all okay, and just about every meaningful possession we had was miraculously spared. As a matter of fact, the only real loss we encountered was the loss of our two small parakeets. However, this is not a story about a loss. This is a story about an extraordinary gain, and a lesson in life that was experienced as a result of the disaster that occurred.

It didn’t take long for the neighbors to react. Many were on the street watching the fifteen fire engines, water trucks, and numerous firemen, brutalize an already suffering home. They began the mantra we would hear so many times. “If there’s anything I can do to help, just let me know.”

It was a kind statement, but I simply didn’t know how to answer the mantra. I didn’t think they were going to help us rebuild, or volunteer to paint, wallpaper or replace our lost items. In fact, the more I heard that statement, the more irritated I became. Many who said it, barely knew us. I thought quietly to myself: “They don’t really mean that!” After a while, I secretly wished they would simply stop saying it.   Besides, realistically, what could anyone really do?

This is not to say that many of our friends and family weren’t sincere. One neighbor graciously took our cats, while another friend took care of our dogs. The Girl Scout troop and friends brought us home cooked meals, and the neighborhood sent us flowers. Kind words were spoken about us at the Synagogue, and we heard that there were prayers said for us at the local church. For a Jewish family in a town of very few Jews, this was certainly a first! Still, I had a gnawing emptiness and I pushed it so far down, I was only vaguely aware of its presence.

A day passed, and then two: My job was clear. The eyes of my family were upon me and whatever I was searching for had to take a back seat. If I was upbeat – they would be upbeat. If I showed no fear – they would show no fear. I felt energized and motivated to not only lead, but to teach as well.

“If there’s anything I can do to help” didn’t let up, nor did the understandable curiosity that followed with another, often repeated, question: “What exactly happened?” As a family, we actually became very efficient at answering the questions. It was tedious, but necessary.

Our new routine began to form from the hotel we were staying at. We had a system for meals, and system for sleeping. We even had a system for getting the kids off to school. Still, the hollow feeling pursued me. I knew what the kids needed, and that was fearlessness. I knew what my wife needed, and that was confidence. Occasionally I’d quietly ask myself, “What do I need?” I shrugged my shoulders and convinced myself that all I really needed was for people to stop asking me if there was anything they could do to help.

With the family settled into the hotel, and the animals taken care of, it was time to tell the parents. We started with my wife’s parents. With them living in town, we chose to drive over in person. After all, this is not the kind of story you want to tell someone you love over the phone if you can help it.

My wife handed the reins over to me, as I had perfected the art of telling the story in an upbeat and no-nonsense manner. My in-laws sat quietly and heard the whole story. There was no need for drama, meaning the story started with the fact that we were all okay. There were many questions that followed:

“Is the insurance company treating you fairly?’

“How do you know if they are not trying to get away with something?”

“What legal background do you have to assist you in a time like this?”

The questions went on and on. I felt like I was in a law school class, but in fairness to my father-in-law, this was the nature of his profession. He was a lawyer, and naturally he was using that legal mind to help us. I did not disclose the ache I felt, for fear it would not only start me into a tailspin, but my family as well. My father-in-law was looking out for us, and his intentions were good; he simply didn’t know what I needed.

Hours later, it was time to make one last phone call. This call went to my parents, down in Florida. I wish I had been able to march the family into their living room, but a phone call would have to do. Much like the in-laws, this call had been intentionally delayed until much of the uncertainty could be removed from the story.

I knew my parents would be worried the moment I mentioned fire, so I added something new to my story. I calmly told them to be patient because what I was about to tell them was going to be a story that, “went down, but would come right back up again.”

When experiencing a disaster like this, one develops a kind of “A”, “B”, and “C” story, simply because the story is told so often. It’s almost like breaking your arm. Once you show up with that cast, everyone wants to hear how it happened. Years ago when I broke my wrist, I had to tell the story so often that I actually had three versions: a 15-second version, or a “C” story for people who barely knew me, a thirty-second version, or a “B” story for people who casually knew me, and an “A” story for those who knew me well.

The inner circle, and my parents certainly qualified, got the “A” story about the fire. I didn’t miss a thing. I calmly told them everything. Not by accident, I spent a lot of time reassuring them how well we were all doing, and how well everyone was coping. I mentioned the lessons the children were learning, and how we were using the whole experience to grow even tighter as a family.

When I finally finished, I could hear their tension release over the phone. There was finally a pause, and a part of me grew a little tense. Was I in for another legal discussion? Even though I was a 45-year-old man, these were my parents. They were my tribal leaders. Had the son more to learn from the parents? The answer came quickly, and it was a definitive “yes.” There was one more lesson to learn.

It was my father who broke the uncomfortable silence that seemed to last for minutes, when in reality, it only lasted seconds. His words were simple, compassionate, and short. In a clear and even tone, he made a statement that I will never forget. It was a statement that no one had made in the countless obligatory conversations I had been subjected to. He said simply, “they felt no pain.”

For a moment, there was another awkward silence. I knew exactly what he meant, but could not speak. Then he continued and said softly, “The birds were gone quickly, and without pain.” For days, I had heard the words, “If there is anything I can do…” I had grown weary, saying, “there is nothing you can do”, but I was honestly wondering what people actually wanted me to say. Now, in four words, someone had said something that was very important to me. My father understood me. 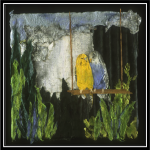 Without being told, he knew where my pain was hiding, and in four words, he freed me from that pain. Despite the social awkwardness of mourning the loss of things so small, the thoughts of their last moments of agony silently haunted me. As my eyes began to swell and water for the first time since the fire occurred, all I could say was this: “Thank you.” What I really wanted to say was this: “Thank you for knowing who I am and for understanding me. Thank you for caring about me. Thank you for being my father.”

There is no life that is spared its share of disasters. When these disasters occur, there are certain losses, but there are gains as well. My family will be wiser, and battle tested, for the next difficult thing that comes our way. However, for me personally, my biggest gain and blessing will be the memory of my father. The wiseman in my village reached into my soul and allowed me to witness the love, compassion and understanding a father can have for his son. For this gain, I am eternally grateful.