Good news; I have some pens for sale! You’re going to love them: I’m going to let them go for next to nothing, and I’ve got a lot of them. First, let me tell you about why I created them…

If you’ve ever delivered a seminar or a keynote, or even attended one, you know that the front row can be difficult to fill. Oh, there are usually a few hearty souls who will sit up front. My guess is they are the same people who sat up front in those large college lectures. The nerve of those people! They want to focus and learn what the instructor is teaching. Of course, the rest of the audience is typically in the last few rows in the back.

My idea was a simple one: I wanted to pay my respects for those who had the guts to sit up front, and I also wanted to provide an incentive for those who would not normally sit near the front. My giveaway had to be small and light, so I could easily carry lots of them in my bag. Due to the sheer number I would potentially be giving out, they needed to be inexpensive. I decided that a pen, with a terrific tagline and design, would be the perfect choice! Each pen would say this:

FROM THE FRONT ROW!

The artwork on the pen would have a picture of me – leaping in the air – with a massive smile on my face. Now, who wouldn’t want to take that little prize home with them at the end of a presentation?! And the best part? I got a great deal on these pens!

It was such a good deal that I should have known something was up. Duke, the guy who normally sells me my pens, wanted almost a dollar a pen. That seemed like too much, so I found a website where I was able to buy 500 pens for 33 cents each. That meant that instead of paying my guy Duke $525 for these 500 pens, I paid my website program thing $190. I still have about 450 of them, so please name a price and they can be yours!

I do need to disclose two small issues, however, with these 33-cent pens. First, if you carefully inspect the artwork, they didn’t 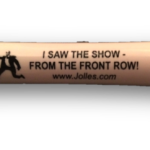 quite get my entire head on the pen. In fact, on most of the pens, the top half of my head is actually missing. Although it’s still kind of funny, it does lose a little something with a third of my head missing… but what you do you want for such big savings!

The second issue is just a little more inconvenient. The pens don’t actually write. At first, I thought it was just bad luck, but once I got to the 20th pen in a row that didn’t write, I realized that none of them were going to write. I tried to argue with the website that I ordered them from, but they were not interested in having a conversation. I suppose I could have been clearer when I ordered them: I should have clarified that I wanted pens that actually had ink in them. I’ll remember that for the next time. 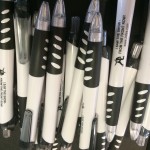 How much would you give me for 400 of these beauties?

Are you still interested in my bargain pens for sale? I’m not here to tell you that you get what you pay for; you already learned that lesson a handful of times. I’m here to remind you that this particular lesson has a shelf life of a few years, and then it creeps back into our lives like an evil seductress, causing us to make the same ridiculous mistake again and again. There will always be vendors out there like Duke, who are going to charge you more to do business with them. But vendors like Duke make sure that little things like missing heads, and pens that don’t actually write, are not our problem; they’re his problem! Actually, in fairness, they are rarely his problem because he, like so many other great vendors, only works with quality companies that sell pens that write, and only produce artwork that has been approved multiple times.

This lesson has been brought to you by a slightly embarrassed Rob Jolles, who will never make this mistake again… well, at least not for the next couple of years.