More Than Just Wanting It 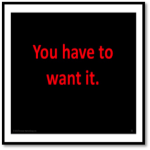 You hear it in sports all the time, particularly after a team has won a big game: “We just wanted it more than they did!” The thought of wanting something more than others seems to answer many questions, but to me, it seems trite and extremely misleading. If only life were as easy as just wanting things more than the others around you.

Don’t get me wrong; wanting something badly is not a completely useless sentiment. It’s just overrated. I happen to have coached soccer and basketball teams for over 25 years, and I could never pin a team victory on just wanting it more. As a matter of fact, I’m quite sure that if I ever wandered into the losing team’s locker room, I would not hear that they just didn’t want to win as badly as we did. When we were very well prepared (which meant we had practiced hard and we had a plan to execute,) we were usually successful. But do we pin our hopes on just wanting it more? In a way, that might provide a sense of false hope, and a waste of energy.

Now let’s leave the world of sports and talk about our world. One of the most defining principles we have is the modest act of believing in ourselves. It sure sounds simple. For those who struggle with believing in themselves, I am quite sure that they have heard the following encouraging words many, many times from family, friends, and coworkers: “You just have to believe in yourself.” Oh, if it were only that easy.

Believing in you cannot be accomplished simply by wanting it, or by being told to do it. It requires preparation, practice, and execution involving a set of skills that, over time, can be mastered. For the sake of this BLArticle®, let me highlight just one of these skills, because without this particular skill, no other skills really matter.

Allow Yourself To Try… and Fail

Let’s get one thing straight for those who do not personally know me: I’m a highly competitive human being, to put it mildly. I enjoy winning, and I have never been a fan of losing. It’s the third option, however, that really disappoints me. That’s the option of not trying. If you think back to some of your greatest accomplishments, I can almost guarantee you that those accomplishments were not achieved without the risk of failure. As a matter of fact, I’m quite sure you’ll see that the greater the achievement, the greater the risk of failure. In a strange way, success and failure are almost teammates. I’ve never met a person in my life who has never dabbled in both, and yet, the fear of failure often seems to be the louder and stronger of the two.

The fear of failure will quietly, and subtly, sneak into our sub consciousness, and it will bully our desire to try.

Once inside our minds, it begins to paint a series of worse case scenarios. Before we realize it, we are silently retreating from whatever it was we were about to try.

But what if we redefined success as a willingness to fail? What if we celebrated both our wins and our losses by the effort we put forth, and by the courage we displayed in our brave attempt to try. To begin with, I would bet that we’d be celebrating a whole lot more victories! What’s more, our success would clearly be under our control, which would then breed more confidence, which would then breed a belief in ourselves.

Once upon a time, when we were young, we truly believed that if we tried as hard as we could, we would be victorious no matter what the outcome was.  We weren’t afraid to try because success was defined by what we learned from our experience, either through winning or losing. We not only believed in ourselves, but we also improved each time we tried. Somewhere along the way, that is “coached” out of us. I think we had it right when we were too young to even question it. Believing in yourself has very little to do with “wanting it;” it has everything to do with allowing yourself to try. You have to encourage yourself to try. With that encouragement and your willingness to attempt something risky, you will ultimately find one of the greatest successes you can ever achieve; a belief in yourself.