As we continue to find our way through the world of virtual delivery, one thing remains consistent:  Adults do not like sitting for long periods of time… period!  Exactly how long adults can sit for in a training situation is constantly being debated, but it’s safe to say it’s somewhere between 35 and 55 minutes.

In the world of live delivery, there are some pretty, easy fixes for this issue:

Ah, but now it’s the dawn of virtual delivery.  The presenter can no longer rely on the most valuable tool in a presenter’s arsenal – physical movement.  Fear not, because the next best thing, “mental movement,” is available!  Here are three, simple examples:

There are a handful of other common ideas, but you’ll notice one classic thing that’s missing: PowerPoint.  Yes, PowerPoint is a visual aid that will stimulate mental movement, but remember this: When that PowerPoint is being shared, the presenter is now relegated to a small portion of the screen.  He or she is the size of a postage stamp.  Some slides are good, but for the most part, presenters are going to have to work with far fewer of them.  Too many slides, or having those slides on the screen too long, will actually contribute to boredom rather than relieve it.

Now that I’ve made a pitch for mental movement, there is one, final technique that will help to hold attendees when meetings are longer than an hour.  I’m a fan of quick, five-minute breaks.  I’m fully aware that doing these might risk losing some of your virtual attendees to other tasks, but I have a secret weapon; a break slide.  On that slide I have a five-minute, countdown timer, with music playing.  Without it, attendees will truly try and get back on time, but often, people tend to want to attack one or two extra tasks that have been building up.  With the timer, you will be surprised how many attendees will keep an eye on the screen and hustle back.  In a sense, the timer acts as the attendee’s conscience.

Yes, it’s the dawn of virtual deliveries, and one of the casualties is attendee physical movement.  However, mental movement is the next best thing, and with planning and practice, you’ll continue to hold the attention of your attendees just like you did live and in person! 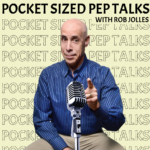 What if I told you that having a positive outlook would not only reduce your stress, but it would also improve your luck?  Have a listen to my latest, “Pocket Sized Pep Talk” – Getting Luck To Work For You, and you’ll learn five separate techniques to consider.  If luck seems to have left your side, have a listen; you won’t be disappointed!  After you’ve heard my podcast, please listen – follow – rate – review!  https://podcasts.apple.com/us/podcast/pocket-sized-pep-talks/id1497772972