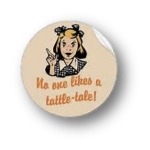 I’ve never been fond of a tattle-tale. I didn’t like them when I was a kid, and I don’t like them now. Can you imagine the nerve of someone telling on you when you’re in an important meeting? Perhaps you’re standing in front of an audience, in the middle of a presentation, when the tattle-tale strikes. Talk about nerve! Who, in their right mind, would actually go out of their way to alert others of a mistake you have made? To make it even worse, it is almost always a mistake no one would actually catch if this knucklehead didn’t blab to others around them?! It turns out that this knucklehead is you!

It happens to the best of us. You are in a pressure situation, and under pressure, it isn’t unusual for the mouth to be moving faster than the brain can think. Instead of slipping in a filler word like, “um” or “uh,” we slip in filler sentences like these:

Unfortunately, these filler sentences are not only unnecessary, but they also alert others of the mistakes you are making. These are mistakes that people would be totally unaware of if there wasn’t someone being such a tattletale. You’re not just tattling on yourself; you are also diminishing the experience you are creating for others.

So often, we are our worst enemies. We aren’t being judged on how perfectly we handle information; we are being judged on how perfectly we handle ourselves.   For the most part, people are rooting for you. By rooting for you, they are rooting for themselves.   They don’t need to hear, nor do they want to hear, of your mistakes. These mistakes are as irrelevant to them as they are to you. But these filler word phrases, spoken under your breath, are never lost on others. As a matter of fact, these little tattle-tales become a major focus to others and leave a lasting impression. Those you are communicating with are left thinking, “It was a good meeting. If only the person I was listening to had done _______.” Mistakes can and will almost always happen.

The next time you are searching for a document, or you’re making some delivery decisions on the fly, or you’re failing to mention something you normally mention earlier, or you’re struggling with any of the thousands of other things that can often go awry, don’t be a tattle-tale. Spare all those around you the filler words no one really wants to hear. Just cover it up and push forward!