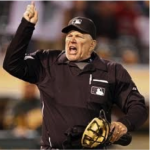 While we were growing up, I’m guessing most of us had some rather interesting part-time jobs. I know I had my fair share. One of my more unusual and challenging jobs was during my senior year of high school, when I worked as an umpire. With my best friend Bob, we umpired dozens of games together.

I envied Bob because he was about six inches taller than me, about fifty pounds heavier, and when he made a call, no one questioned it. Because of my rather short stature and less forceful voice, (when I made a call,) everyone questioned it when I made a call. Throughout the games, my friend Bob and I  both uttered pretty much the same four words; “strike, ball, out, and safe.” Yet each of us had two completely different results.

During one particularly ugly game, I was dressed down multiple times by both coaches for making calls they disagreed with. I went home discouraged and I told my Dad that I wanted to quit. He seemed puzzled because he knew I was a student of the game. When I told him about the hammering I was taking from the coaches, he asked me to let him hear the way I made a call. Nervously, I got into my umpire crouch, pretended to be watching a play, threw my arm up in the air, and said, “out.”

He looked at me, and he told me he didn’t need to hear any more: He knew what the problem was. He then asked me to try it again, only this time he told me to say it louder. I once again got into my umpire crouch, pretended to be watching a play, threw my arm up in the air, and said, “out!”

His look told me all I needed to know; he wasn’t pleased. I could see the Marine in him begin to take over as he sternly asked me to say it again, only louder. “OUT!” I shouted, and he shouted right back: “Are you sure?!” I made the mistake of saying, “yes” but after the look he shot me, I quickly cleared my voice and shouted, “YES!” He wasn’t through with me as he shouted, “ARE YOU SURE?!” I shouted right back, “YES! OUT!!”

Smiling, he put his hand on my shoulder and said this: “If you make every close call with that volume and level of conviction, you won’t have any more issues with coaches. They won’t question the calls you make…” Sure enough, they never did.

If it sounds like I just helped you to become a better umpire, you’re missing the message here. There are quick moments of truth every day, and those moments require a level of authority that needs to come out in your words, as well as your delivery of those words. When someone asks you if you can do a particular job, they aren’t just looking for the words, “yes, I can do it,” whispered back or “YES, I CAN DO IT,” shouted back. They are looking for those same words but stated with power and conviction.

“The words may open the door for others to believe you, but the tune helps them to go through it.”

Remember, the easiest way to get others to believe your words is for you to believe them yourself.