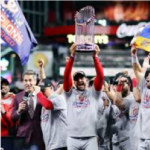 I am a lifetime Washingtonian, and that means I have endured a certain level of pain when it comes to rooting for our local sports franchises.  I was a Washington Senators fan, but we lost the team when I was thirteen years old… I had to wait 33 more years until a team was finally moved back to Washington. This is only an example of some of the pain I have experienced, being a sports fan in this city.  Having never won a playoff series in my lifetime was almost as painful until… it happened.

The Nats recently completed the greatest upset run in the history of baseball. The Nats 2019 baseball season was beyond fantastic, and I’m not exaggerating.  They weren’t just a long shot; they defied the odds altogether. According to Baseball-Reference, a site used by major media organizations and baseball broadcasters as a source for statistics, the experts set the Nats’ postseason odds at a meager 3.8% on May 24th, and their odds to make the World Series set at a mere 1%!  Once they were in the World Series, they were the biggest underdog in twelve years – and their odds dipped even lower as they trailed in the final two games they needed to win.

Behind any great team’s success is a great manager, and that was certainly the case for the Nationals with their second-year manager, Dave Martinez.  Ironically, Martinez may have been days away from being fired, but then the team started winning. It was Martinez who was credited for coming up with one, simple concept that turned things around. What was the saying that helped the team through their darkest moments?

How’s that for simple?  It’s not too complicated, or cryptic, or obscure.  In fact, it’s brilliant.  The odds may have been daunting for taking a team that’s 12 games under .500 to the playoffs, but they found success by just focusing on winning each day – one game at a time.  The concept wasn’t really all that imposing; it wasn’t full of pressure, and it allowed the team to loosen up.  They weren’t carrying the weight of a season on their shoulders.  They were merely carrying the weight of a ballgame.  It also allowed them to do something that’s critical, regardless of the odds; have fun!

Maybe we can all ignore the longshot odds we often face when trying to accomplish great things, and concentrate on a different system of success: “Going 1-0 every day.”  This simple approach can surely be applied to a lot more than a baseball team.  How many of us have faced long odds in the process of going after something we really wanted? We knew that we had a lot of things we were going to have to do very well, and we knew that we were going to need some lucky breaks.  Just imagine how much more successful we could all be by just concentrating on the here and now, and by focusing on mastering the tasks that are right in front of us at that very moment.  We don’t need to win all our games; what we need to do is focus on, “Going 1-0 every day.”

As a 30+ year professional speaker and trainer, one of the most common questions I get is this: “How do we make sure the training sticks?”  Take a moment and listen to this podcast; “SalesChats” with John Golden.  If you want to know why most training fails, listen up! https://www.youtube.com/watch?v=KR3dDOlTK7U&list=FLxBXKhqz0xBwbUPMqNthAJA&index=2&t=1293s