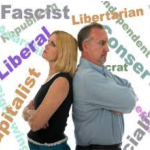 In today’s political landscape, many believe that changing the political views of another person is nearly impossible. I must be a hopeless optimist, because I think it’s not nearly as difficult as many seem to believe. A process does exist that can change the politics of someone else, but that process comes with one, simple condition:

When it comes to changing another person’s political mind, you must first be willing, truly willing, to have your mind changed as well.

This condition is 100% within your control, but this condition is nonnegotiable.  After all, why would people be interested in opening their minds to change, if they don’t believe you are capable of doing the same? I’ve spent over 30 years of my life helping people to change minds, and I’ve worked with quite an assortment of professions. I’ve worked with executives in financial institutions, professors at multiple universities, leaders and sales people of Fortune 500 Companies, parent groups, teachers, doctors, lawyers, police officers, hostage negotiators, and many more. I’m no stranger to changing minds. But changing your political friend’s mind? Well… that’s no easy task! Here are four of the most important things you’ll need to do to change your friend’s mind on political matters:

Understanding is a two-way street.

We must be willing to tolerate, if not embrace, another person’s point of view, as a condition to put forth an opinion of our own. The rest is easy…