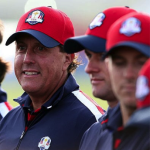 This past weekend, we were all treated to some amazing golf as the United States won the Ryder Cup. The Ryder Cup is a golf tournament played every two years, and it pits the best golfers from the United States against the best golfers from Europe in a series of head-to-head matches. We have lost six of the last seven Ryder Cups to the team from Europe. This year, our team appeared to be a weaker team than our past U.S. teams, so there was no reason to believe that this year would be any different. But this year was different because the U.S. didn’t just win: They dominated the event and there were three reasons why.

The Only Person that Likes Change is a Baby with a Wet Diaper.

Be Willing To Change

Change is never easy. After a previous loss, when Team Captain Tom Watson was asked what the Americans needed to do differently, he quietly said, “play better.” That did not sit well with the players or the fans. Leading up to the recent Ryder Cup, Mickelson was the voice of change, and he was mocked for it by just about everyone but his teammates.

As Phil indicated, the fact is that this team didn’t just need to play better; they needed to plan better. How many times have you been a part of a project or task that was less than perfect, but it was done in a certain way because, “that’s the way it’s always been done and that’s the way we do it!” Change is not a natural instinct, and it takes both leadership and courage to accomplish true change.

The fact is this: The American system was based on an arrogant assumption that a few very good players, with weak relationships to each other, would be playing for a captain they didn’t necessarily know or like… and yet they were all expected to play well and win the tournament. Throughout the years, the American teams have always been the stronger team… at least on paper. Unfortunately, this statistical dominance translated into exactly two wins over the last ten Ryder Cups.

Teams don’t succeed based on statistics. They succeed based on collective decision-making and a clear effort at team building. Coincidently, unlike other Ryder Cup teams, this particular team of players was groomed in team competitions over a period of years, instead of days. As I learned as a basketball player, and then as a coach, you play how you prepare.

It’s not the tools you have faith in – tools are just tools – they work or they don’t work. It’s the people.

In the past, Ryder Cup players had no input whatsoever on any decisions made, including who the captain of the team would be. In turn, the captain felt zero obligation to consult or explain himself on any decision he made. This particular team helped chose its captain, and as opposed to other choices in the past, they chose an experienced one. As Brandt Snedeker said, “We all felt invested in that.” Ricky Fowler went on to say this: “The players were in a room, helping to build something for this week; it wasn’t just going to be something thrown together. This all started a year and a half ago. It just put us in the best position for the players to play well and the captains and vice captains to do their jobs.”

It’s no secret that strong teams can achieve extraordinary goals. In the end, success often starts from the top. My father, Lee Jolles, used to tell me this bit of wisdom over and over again: “A leader never says ‘go on and do it.’ A leader says ‘come on, let’s do it.” Phil Mickelson was not the captain of this Ryder Team, but he was the leader, and his courageous approach to leadership would have put a big smile on my father’s face. Phil put his reputation on the line, and didn’t just ask for change; he demanded it. With the full support of the team and the captain, he went out and played what some will say was the greatest game of golf of his long and illustrious career… and his inspired teammates followed right behind him.

It had been 2,933 days since the U.S. team popped the corks from those champagne bottles and celebrated together as a team. With a new plan now in place, a better understanding of what it is to be a team, and a new sense of empowerment for the players, it won’t be that long before they are celebrating again.