Craps – The Perfect Metaphor For Success 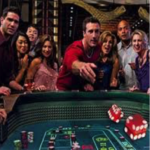 I’ve never been much of a gambler.  I suffer from what I call the “John McEnroe Syndrome.” I dislike losing more than I enjoy winning, and that’s why you probably won’t ever see me in a casino.  I have gambled in the past, however, and the game that has always fascinated me the most is craps.  For those who have never played, here’s my attempt at a one-paragraph lesson:

The fundamental bet in craps is the “pass line bet,” which is a bet for the shooter (of the dice) to win. If the first roll of the dice is 7 or 11, the bet wins.  Any other number to come up on that first roll is called, “the point” and allows the shooter to continue until he or she either rolls the point again and the bet wins, or until a 7 or 11 is rolled again in which case, the bet losses. Sometimes shooters can get hot and continue to roll number after number until “the point” or 7 or 11 comes up and the turn is complete.

Sounds easy?  It would be, if it weren’t for all of the other number combinations.  There are bets that can be made on every number, each carrying its own odds.  You could make a dozen different bets before each roll of the dice, and each will continue to pay as long as the shooter stays away from 7 or 11, which is also referred to as “crapping out.”

It might sound a bit confusing, and it can be a bit intimidating, but the game of craps provides the best chances of winning… only there’s a catch.

To win in craps, you cannot be passive.  You cannot make one small bet at a time, or even two to win.  The way to move the odds closer in your favor is to play aggressively.  That means, putting a lot of chips on the table, which means lots of chips on the pass line, and lots of chips on a whole host of other numbers too.  If the shooter craps out early, you are going to lose a lot of money… fast.  However, if the shooter stays hot, you have a good chance of winning bet, after bet, after bet, after bet.  That means you’re going to make a lot of money… fast.  To be clear, playing boldly guarantees you nothing, but it gives you the best odds for success.  In other words:

“It’s the people who have the courage to put it all out on the table who win.”

Do you see the metaphor yet?  Our instinct is to tiptoe into an opportunity, and hope for significant success.  The safest bets in craps require little investment, offer minimal risk, and provide little return.  What’s more, pursuing an opportunity with a marginal commitment evens allows you to linger around longer.  Your investment dollars will last longer, and you can be fooled into believing that simply surviving longer somehow translates to succeeding longer.

Still trying to make the connection here?  Ask yourself this question:  If you had a substantial amount of money to invest in an idea, which do you think would provide the best chances of significant, long-term success; spending $2,500 a month spread out over three years to cover marketing, sales, website, and website optimization, or spending $8,000 a month spread out over a year?

Don’t get me wrong; I’m not suggesting you take massive risks that will crush you if you fail.  I’m suggesting you pursue a strategy that will provide the best chances of success, and that is often putting an uncomfortable level of your assets in multiple locations.  If you crap out, you’ll most likely crap out quickly.  However, with a little luck, and if your idea is a good one, you’ll win, and win quickly.