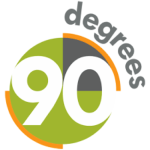 Charles H. Duell, the Commissioner of the US patent office, once said this: “Everything that can be invented has been invented.” He said that in 1899. We can smile at that now, but that kind of thinking haunts me a bit. I think it’s morphed into something more like this: “Everything that can be invented will be invented with an app.” For some reason, we seem bound and determined to believe that the more involved and technical a solution may be, the greater its value.

I couldn’t disagree more. Justifying a solution by the intricacy of the outcome can create blind spots, allowing us to miss ideas that might be right under our nose. As a matter of fact, I believe many solutions are symbolically 90 degrees away. An amazing example is occurring right over your nose, in the luggage racks of some of the newer airplanes being delivered by Boeing.

For years, airlines have been battling “the luggage war,” which alludes to how the airlines handle the throng of bags that passengers try to get on board with them. Seeing the battle that was brewing, the number of bags fighting to get on board dramatically increased when the airlines, in their infinite wisdom, decided to charge passengers who did not bring their bag on board with them. Sensitive to this battle, the airlines responded with a solution of their own; they chose to reduce overhead space, and the war ratcheted up yet another notch.

Over the past couple of years, this has been a huge problem that the smartest minds have tried to tackle… unsuccessfully. That is, until I boarded my last flight to Atlanta. As we waited to board the flight, I was intrigued when I heard this announcement: “Ladies and gentlemen, we have a full flight today, and we’ll need your help boarding the plane. We are on a new Boeing Dreamliner today, and we feel, with your cooperation, all bags will fit on board.”

As I entered the plane, I wondered what amazing technology I might be greeted with. Was there some sort of luggage app we’d be introduced to? Unfortunately, I was disappointed to find that the plane looked exactly like every other plane of that size that I had ever seen. Three seats on one side, and three on the other – pull down plastic blinds – tray tables that fell from the back of the seat in front of you – and more. In other words, nothing seemed to be revolutionary. Little did I know, the innovative part was right over my head. 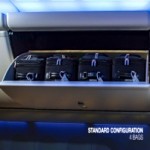 When I went to put my bag in the bin above my seat, I heard the flight attendant say, “ninety degrees sir.” I smiled and put my bag up and in; after all, this wasn’t exactly my first time bringing a bag on board. As a matter of fact, I carry the shortest bag made that offers a suitor, (a trifold section for suits,) and there isn’t a full-size overhead compartment this bag won’t go straight into. At a mere 21” long and 14” wide, I’m no bag hog!

Once I proudly placed my bag above, I once again heard the flight attendant repeat her message, “ninety degrees sir.” Somewhat puzzled, I smiled, and with a sarcastic expression, I pointed to my bag snuggly in place. I thought that the flight attendant might think the bin would not close, so I reached up, closed it, and then opened it again. When I looked back at the flight attendant, I smiled smugly and and shot her a fake, “go bother someone else who is hogging overheard space” smile.

Rather than getting a congratulatory smile from the flight attendant, I was once again serenaded with the words “ninety degrees, sir.” In a flustered and somewhat frustrated maneuver, I turned the bag length wise and said, “I can’t imagine you want me to turn the bag this way; I have no idea what you mean by ninety degrees!” 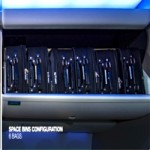 I’m not ashamed to say – I was angry. I was angry because I’ve been on many, many planes and I didn’t know what she wanted me to do! I think I was most angry, though, because the airlines have been trying to solve this baggage issue for decades, and I thought I was going to see something innovative and groundbreaking! Instead, I saw the same old plane with the same old luggage rack… or so I thought.

Seeing and hearing my frustration, the flight attendant finally came over and showed me. With a sly smile, she walked up and without removing the bag, she turned the bag 90 degrees. In an instant, and with one twist of the wrist, the overhead bins had just expanded by 50%, and every bag made it on board on that sold out flight.